The BCOF in Japan.

On 13 February 1946, Australian troops, the vanguard of a 37,000-strong British Commonwealth Occupation Force (BCOF), disembarked at the war-devastated Japanese port city of Kure, almost four years to the day (15 February 1942) after Singapore, the bastion of the British Empire in the Far East, surrendered to the Japanese Army. At its peak, there were some 12,000 Australians serving in BCOF. From 1946 to 1952 Australian forces were responsible for the military occupation
of Hiroshima Prefecture, site of the first atomic bomb attack in history. During this time the role of the Australian forces changed from that of an “occupying power” to a new role of “protective power”; in 1950 Australian forces in Japan were deployed, under UN command, to operations in Korea.   (courtesy Dr James Wood)


At its height in 1946, the Australian component of BCOF consisted of 34th Infantry Brigade Group AIF (65, 66 and 67 Battalions from 6th 7th, and 9th Divisions), 1st Armoured Car Squadron, "A" Field Battery, and 130 Australian General Hospital plus ancillary and lines of communication component, No 81
Fighter Wing, with Nos. 76, 77 and 82 Squadrons (Mustangs) and No 5 Airfield Construction Squadron, plus a hospital and base operational services.

The AIF ceased to exist on 30 June 1947, when the Interim Army relief troops began to arrive. Subsequently the Australian Regular Army took over from the Interim Army,3rd Infantry Battalion Royal Australian Regiment, established headquarters at Hiro, near Kure. The RAAF component was located at Iwakuni, with a shore base for the naval force located at the former Japanese naval base, also at Kure.In February 1946 the Australian component of BCOF comprised 9,155 Army, 2,185 RAAF personnel as well as supporting unit of two RAN ships serving with the British Pacific {then Far East) Fleet. By August 1946 when at maximum strength, total BCOF all ranks was 40,236. US troops totalled 152,000.From February 1946 to June 1950, 15 RAN warships were in
Japanese home waters engaged on Occupation tasks. Most were assigned to this duty more than once. They were the cruisers Australia, Shropshire, and Hobart; the destroyers Warramunga, Arunta, Bataan, Quadrant, Quiberon  Quickmatch, the frigates Culgoa, Murchison and Shoalhaven and the LSI’s Manoora, Westralia and Kanimbla. The naval shore base was designated HMS Commonwealth. On 1 October 1948 Australia took command of the total
naval force and was redesignated HMAS Commonwealth.The air component of BCOF was known as BCAIR, and came under the operational control of the US 5th Air Force.  ( courtesy Antony Buckingham and BCOF Association)

The role of the occupation force was manifold: from demilitarising a former enemy and rebuilding its basic infrastructure to the high-minded ideal of bringing democracy to a country long under the yoke of Imperial rule.The occupation experience for those Australians who spent time in Japan was diverse and complex, with some surprising legacies. It was the first time that such a large number of Australians were able to explore an Asian society in depth -- a domestic encounter between people with apparently incompatible traditions and temperaments.
The Australian experience of occupation encompassed power, prejudice and possibly violence, but it also engendered friendship, compassion, and even love.  (courtesy  Occupational Hazards: the story of BCOF -Radio National ABC)

The Australian BCOF Forces arrived in Kure  Japan on the    21st February 1946. 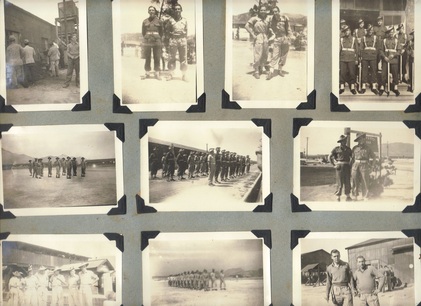 The Australian occupation of Japan constituted a unique set of circumstances and cannot be compared accurately with any similar situations applying elsewhere at the time or since then. There were many factors which made this situation unique
not the least being :­
1) The circumstances of the Japanese surrender and the uncertainties consequent upon Japan's adherence to it . There was no certainty that this would occur and the Australian forces entered Japan with the knowledge there could be resistance encountered.  The members of that force know there were attempts at provocation of the forces although these were played down and other reasons given . Examples of attempted resistance organised has in the past been documented
2)The location of Australian forces in the Hiroshima Prefecture, this being the site of the first US atomic bomb attack on Japan .The extremely hazardous nature of the military activities undertaken including the destruction of Japans largest poison gas facility together with an enormous amount of armaments, a large proportion in hidden stores that had to be discovered and then disposed of.
3) A feature of the Japanese capitulation was that it rested upon the obligation placed on the Japanese people by the Emperor to abide by the surrender arrangements (The Potsdam Declaration) at the time and during the initial period of the occupation when some 6.5 million Japanese military personnel were being demobilised under the strict control of American Forces and the 35000 personnel comprising the Commonwealth Occupation Force. There was considerable uncertainty as to whether the Japanese would actually adhere to the Emperors call.  It is important to bear in mind that when the occupation forces went to Japan , there was no guarantee that they would not be involved in military operations arising from civil disturbance and insurrection.
4) Apart from the potential threat from Japanese nationals , the allotted Australian area of operations was Hiroshima Prefecture and therefore BCOF personnel were continually at risk as a consequence of earlier military action (i.e.) The dropping of the atomic bomb on Hiroshima, the implications of which were imperfectly understood and generally ignored. The very act of dropping the atomic bomb on Hiroshima in itself created an operational military area the nature of which was unprecedented and the significance of which was not recognised at that time and  that belief still exists today.
5) The Australian force was organised, equipped and operated as a combat force , was so regarded and employed by the US Supreme Commander General Douglas MacArthur under whose command the force was placed. The Australian Force fully armed went into the country side searching out caches of armaments, eventually to be destroyed , so preventing any type of resistance. The Australian Government was quite prepared to and did place all Australian forces in Japan under the operational control of the US Commanders in Japan. The Australian Commander in Chief Lt General Northcott in 1946 recommended that the BCOF area be declared an operational area and gave reasons for this recommendation . He was the commanding officer on the spot where operations were taking place and was aware of all the circumstances that caused this recommendation to be made . Moreover the purpose of the force was to ensure Japanese compliance, if necessary by the use of force to have the Japanese comply with the terms of the surrender. To this end the principal Australian component the 34th Infantry Brigade was organised .
Amazingly -The governments of New Zealand and the USA give full recognition to their forces involved in the occupation of Japan .
The Australian Government to this day still denies recognition of the BCOF service in Japan as active thus denying members of benefits afforded to other serving members of the military at the time. The remaining BCOF members number around 2000 and dwindle each year. What they strive for is recognition of their role and its importance in Australian military history.