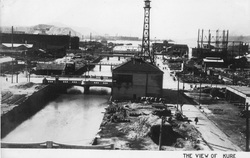 In December 1946, Cabinet approved the despatch of families of Australian
servicemen to Japan when housing and medical facilities became available.    The
first group of families reached Japan on 1 June 1947.The main family housing area was located on a disused Japanese air strip  fronting the Inland Sea at Hiroshima, in the 34th Australian Infantry  Brigade area. Here a considerable township grew up with bungalows and two-or   four-apartment dwellings. Chapels, a school, shop and cinema were  included in the development. Japanese contractors carried out the work and    furniture was obtained from Japanese sources. To give variety, different    types of houses were interspersed, and the changing shades of pastel    colouring of plaster walls and roofs made a cheerful and bright picture. My  wife, on being consulted regarding the future name of the area, immediately asked what was the Japanese for ‘Rainbow Village’. Niji Mura it  therefore became and still  remains.

As the force settled down in permanent locations, it became possible to provide amenities on a scale more suitable for the conditions. It must be
remembered that our troops were forbidden to fraternise or enter Japanese houses, hotels or places of entertainment, and were voluntarily doing a job    thousands of miles from home.This move, together with the provision of sports grounds, a club and  theatre, and the sight of new buildings under construction made a tremendous difference to the outlook of all ranks. Units developed a keenness and smartness, and set an example that was outstanding in any company.

Leave
Leave  in Japan was the next most important thing for the welfare of the  troops. Steadily, hotels were taken over to give BCOF troops access to
historical and cultural places at Kobe, Kyoto, at Nikko with its temples and winter sport; at Kawana with its golf, riding and sea air; and in Tokyo.    Even so,
the demand far exceeded the supply, and many of those who returned  early to Australia saw little of the famous resorts and lovely countryside of
Japan.
(Adapted from Major General R. W. L.
Hopkins, History of the Australian Occupation in Japan, 1946-50, page
108-109)
Secret Societies
The Emperor told his people to ‘bear the unbearable’ in August    1945, there were still some who refused to accept his direction.    Fortunately, the
majority of Japanese, having endured war since 1931,  followed the old Japanese proverb ‘the willow branch but bends beneath the    snow’ and accepted
the foreign occupation for the moment, with thoughts  for the future.However, out there were fanatics looking for victims. Sergeant Tom Kerr, a
member of my unit, was found dead in a street, poisoned.

(Adapted from Shinbun Issue 40)
Civilian crime
There were fewer than 1,000 civilian arrests in the Australian area in three years. By far the greater majority of the cases related to illegal
possession and the taking and disposing of Occupation Force goods. Many of the cases were petty offences. There was a remarkable lack of crimes of
violence against the personnel of the Occupation Force throughout the whole
of Japan.
(Adapted from Major General R. W. L.
Hopkins, History of the Australian Occupation in Japan, 1946-50, page
112)
How were Japanese war brides received in Australia?
When Gordon Parker married a Japanese girl, ‘Cherry’, early in the  occupation of Japan, he stirred up considerable concern amongst the army and
Australian politicians. Not long after Gordon and Cherry's marriage, other BCOF members applied, thereby forcing    the Australian Government to develop a policy with regard to foreign marriages. By 27 March 1952, the Australian government had authorised the    admission of Japanese wives of Australian
servicemen and ex-servicemen into    Australia, provided they were approved by the Australian Embassy in Japan.
Kure Municipal Police screened all girls to ensure that they were not:
In addition they had to pass a thorough medical test that included a full  x-ray and blood test. If tuberculosis or any other serious illness was
present, they were denied access until totally fit. The examination and investigation was considered more stringent than that
required for any other migrant.

The average age of wives was 22, and only 49 of the 150 couples had, or
were about to have, children. In 22 out of the 150 cases, both parents (of
the bride) were dead. Of the remainder, the parents of only 14 objected to
the marriage. Only in one case did the Japanese police request non-approval
of the marriage, because the parents were strongly opposed to the marriage.

‘Whether Australia should ban the admission of Japanese wives is a
matter for eventual discussion, but until that decision is made those      wives
who do come to Australia - lawfully and at the invitation of their
Australian husbands - should be treated decently, with a special effort on
the part of returned men to make them feel comfortable. If only to offset
the inevitable hostility from that small section of the community who, in
addition to not having travelled beyond their own shores, have a way of
attacking any person who does not conform to their own pattern and way of
life.’

Daniel Patrick Crane was born on the 30th January 1924.  KIng George V
ruled the British Empire. Stanley Bruce was Australian Prime Minister. Dan grew
up in suburban Buranda in Brisbane. He did not have a full education and gained
work as a packer.On the 20th February  1942 at the age of 18 years old
he enlisted for Military service at Annerley in Brisbane  and was stationed
with  the 15th Battalion.  After enlistment, Dan trained in
Boggabilla and found himself  involved with anti aircraft artillery and was
graded as a Group 3 Gun Layer  The gun layer had to sit on the seat and he
had to watch the dial for directional firing. And, of course, there were the
other positions such as loading also. On the 25th July 1943 he embarked from
Townsville on the Duntroon and found himself in Port Moresby.
In January 1943 the Battalion had gone to New Guinea to take part in the Salamaua and Lae
campaigns and did not return to Brisbane until July 1944. In November it was
sent to fight in Bougainville. The Battalion finally returned home in January
1946 He took part in various actions in New Guinea and in March 1943 returned
to Townsville on the SS Taroona. He was reassigned  to a training
contingent at Cunungra and finally as the war was coming to an end in the
Pacific took up positions with Brisbane Base watercraft workshops that were
occupied with maintaining transport ships. Many of these groups had service in
New Guinea.Dan remained in Brisbane in this new role until he was
transferred from the Artillery regiment  to the 195 Australian Supply Depot
and he stayed there until February 1946.Life was about to take another change in direction for young Dan though.
Just  6 months  previously on the 6th August 1945 the atomic bomb
was dropped on Hiroshima and 3 days later a similar fate for Nagasaki in Japan .
The war in the Pacific was over finally. By February 1946 the BRITISH
COMMONWEALTH OCUPATION FORCES  had been mobilised and Dan was again
reassigned to the 16th Infantry Training Brigade and on the 30th April
1946 he embarked on the Manoora from Sydney for Kure city in Japan. It was here
in this far off land that Dan and his fellow soldiers took on a new role.
Dan was now a member of the BCOF ( British Commonwelath Occupation Forces) He was
now reassigned yet again to the 34th Brigade  A Field Battery RAA and spent
time in Kure, Hiroshima, Kaitachi, Hiro and Tokyo .Some of his duty was
ceremonial but also assisting with rebuilding of a devastated land. The American
soldiers were given postings around Tokyo but the Australians were stationed
around Hiroshima and Kure . The BCOF story is a one of courage and determination
in a role that was neither combatant nor confrontational as the war had been
just months previously. A defeated  nation was now under the control of a
foreign force that included Australians, British, New Zealand and Indian
forces.As part of the 34th Brigade, responsibility was to provide security
and enforcing Armistice conditions in Hiroshima Prefecture. During this time the
Brigade was involved in providing security for elections, locating and
destroying war equipment and stores and ceremonial duties including mounting
guard at the Imperial Palace in Tokyo.Finally in July 1947, Dan returned to
Australia on the Kanimbla  and in August 1947 was discharged from Military
service to begin another life . Most BCOF forces were removed from Japan by 1948
with all forces redeployed with the outbreak of the Korean war.
More than 16000 Australians spent some time in Japan as part of the BCOF. From 1946 until
1952.The Australian experiences of occupation encompassed power, prejudice
and possibly violence, but it also engendered friendship compassion and even
love which remain as legacies today.Dan Crane's photographic diary portrays
a glimpse of life for those 15 months  in a land full of rich culture and unique conditions.